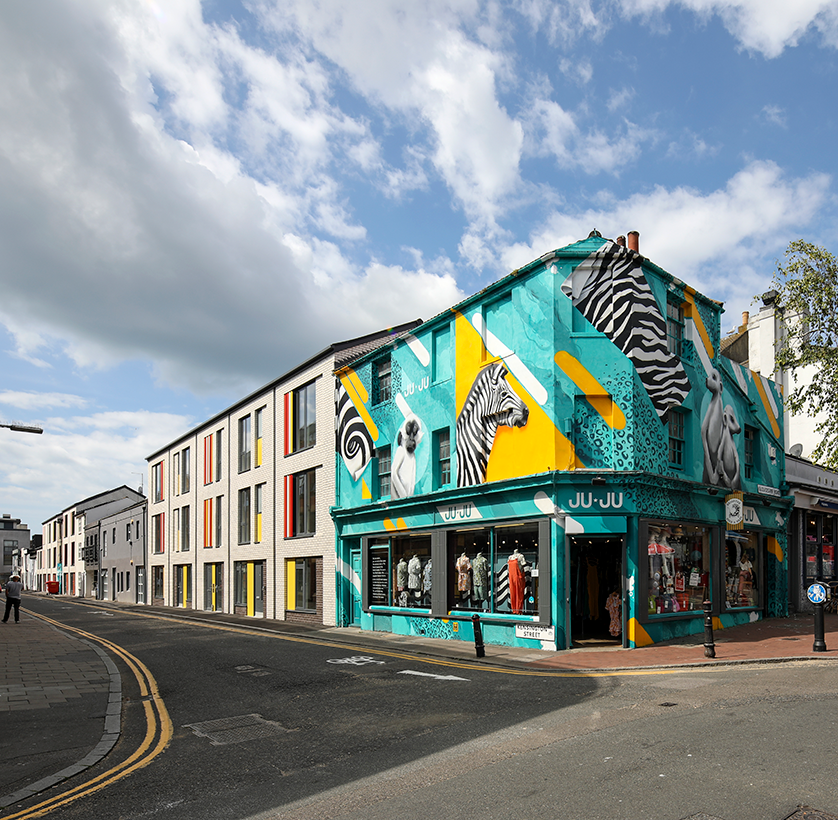 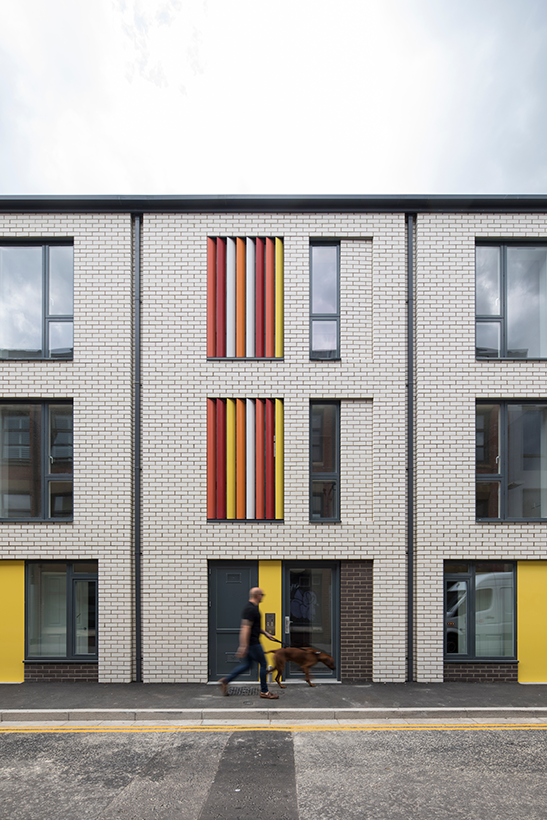 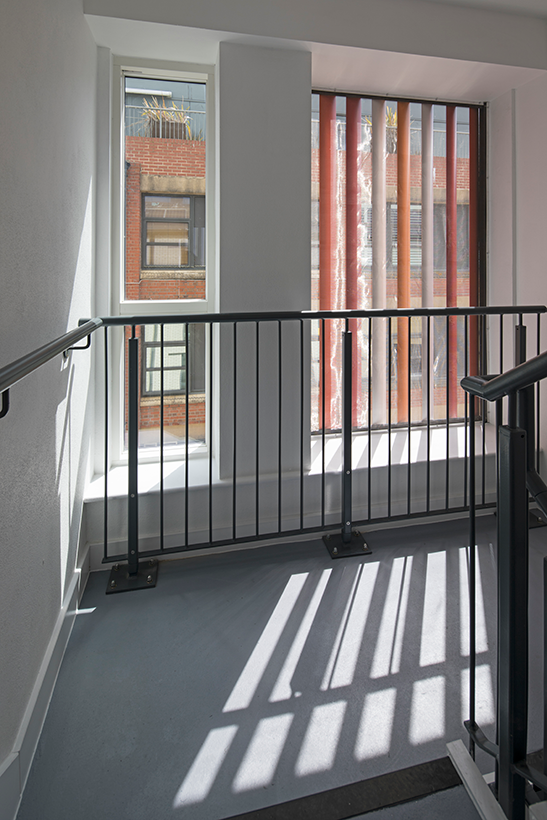 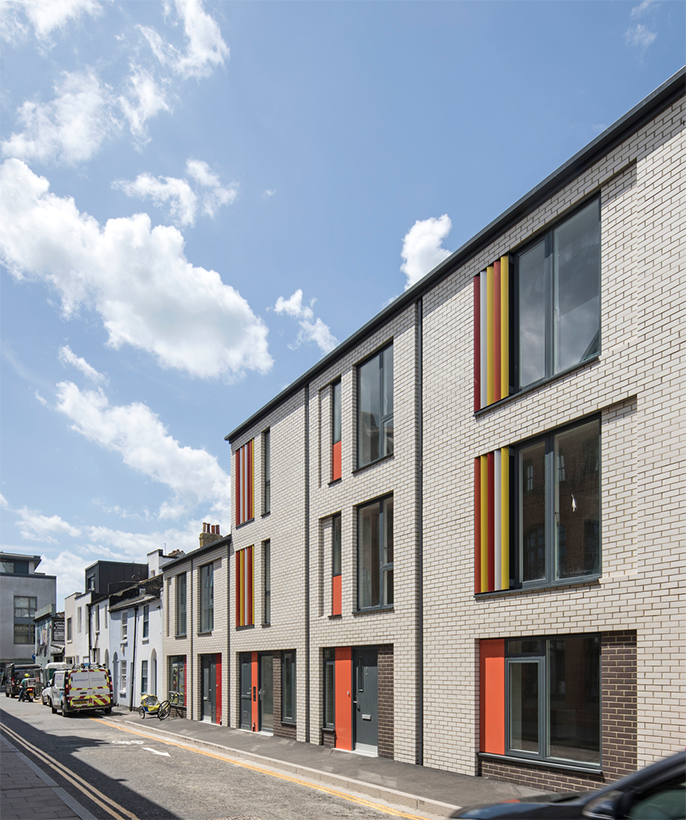 This recently completed scheme provides 12 much needed affordable homes across three infill sites in the heart of Brighton’s city centre. The project forms part of Brighton and Hove City Council’s New Homes for Neighbourhood Estate Regeneration Programme, which has the ambition of targeting the shortage of affordable housing and meet the City Plan housing target of 500 new homes on HRA land by 2030.

Kensington Street, a narrow street within the North Laine area of central Brighton, runs north-south from North Road to Gloucester Road. The street was originally laid out circa 1823-30 with very small two to three storey cottages with very shallow plots, stretching approximately 7.5m from the back of the pavement to the rear of the plot, with a continuous frontage along its length. ‘Slum clearance’ in the late 60s and early 70s saw the removal of numbers 4-7, 9 and 11-14 Kensington Street. Vacant sites were paved over for parking, leaving three gaps along the length of the street.

Kensington Street has been called Graffiti Alley and all three sites had historically been very popular with street artists. The artwork had become a tourist attraction in the city and recognising the cultural importance to the city, our Client – Brighton and Hove City Council – committed to recording the street art on the sites and putting together a public display of the photographs. This exercise was carried out in March 2018 and the photographs have now been moved to The Keep archives so that a permanent record of this art is retained for future generations.

There were no obvious clues to suggest what architecture is appropriate for the new development, surrounding buildings being eclectic in style, period and materials. The opportunity therefore existed for Baily Garner to make a bold statement, without any obvious constraining features other than the tight urban nature of the site and the scale of the buildings nearby.

With reference to the site’s location within the North Laine conservation area, we looked at features of this and other conservation areas in order to inform the material palette and the form of development.

Many new infill developments in the North Laine use render as their main facing material – a cheap and contextual reference in most cases. Our proposed buildings are positioned at back edge of pavement with no defensible space and we felt that a more robust solution was appropriate. The proposed units front directly the pavement of Kensington Street and we proposed a brick finish as a tough, low maintenance solution.

The scheme itself uses repetition in the manner of the local Victorian streets to give a rhythm to the elevations. The composite windows are finished in a complimentary grey colour whilst vibrant coloured panels nod towards the brightly painted shop fronts in the North Laine area.

Given the city centre location of the site and it’s excellent connections to public transport networks, the scheme is car free. All of the units have been designed to meet Lifetime Home standards with one unit suitable for occupation by a wheelchair user.The proposals have been developed in close consultation with key stakeholders including local residents, council members, BHCC housing and planning departments. The scheme was approved at committee in November 2016 where the committee members praised the quality of the proposals. 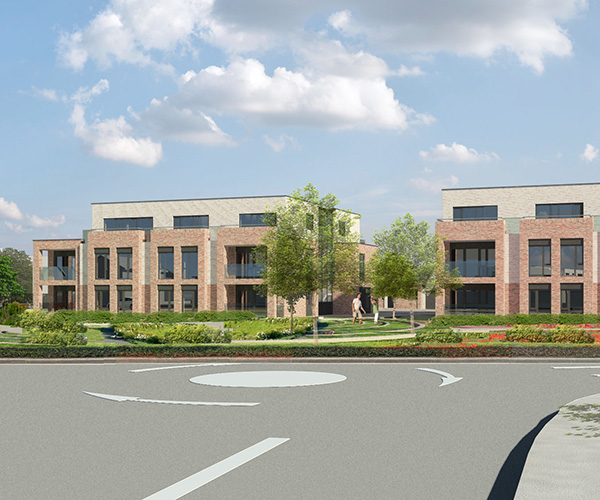 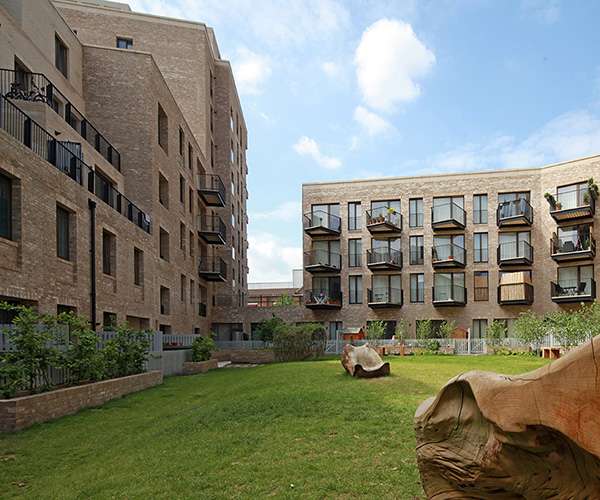